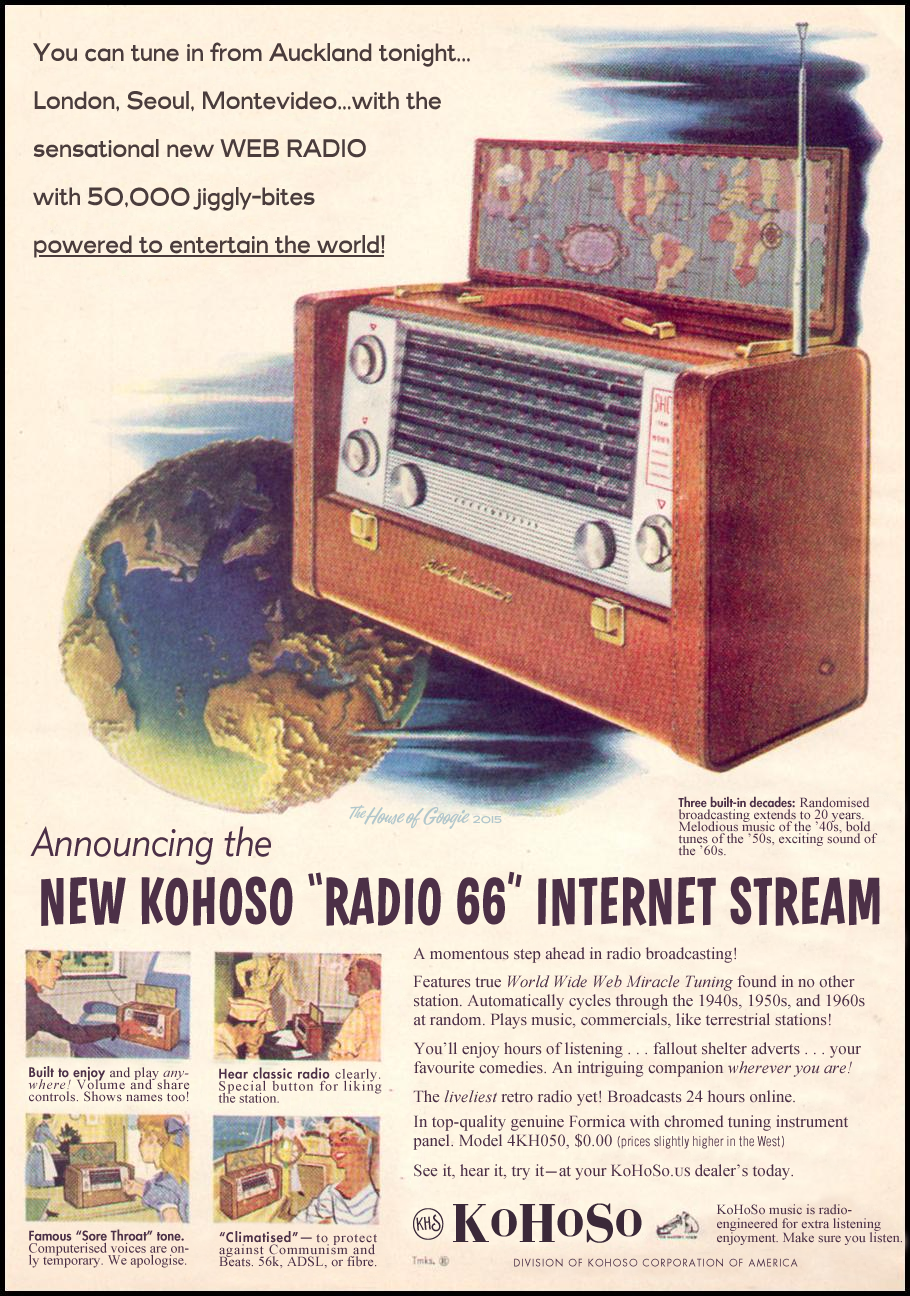 Fan art for KoHoSo Radio 66 – September 19, 2015
Credit: imperialgoogie (Jordan) of The House of Googie on Tumblr
This past Saturday night, I returned to my computer after a nap, supper, and the current ritual of going through a few episodes of The Red Green Show with the little woman, Miss KoKo. Even though Red and all the other members of the Possum Lodge always put me in a good mood, I was still kind of depressed.

After the previous week when we went on vacation to Cayucos, Saturday was the day I was going to sit down and really get some serious work done on KoHoSo Radio 66. Unfortunately, that did not happen to the extent I wished.

There seems to be some sort of glitch in Radionomy’s system that occasionally takes my stream down (at least in the United States and Canada) for anywhere from a few minutes to a few hours. This is extra-triple important as KoHoSo Radio 66 has to go through a sort of probation period with Radionomy called the Basic Level. During its first three months, a station must hit an average amount of listening time per day. If it does not reach this requirement, the station and all the work I have done to it will be deleted. With that, I believe everybody can imagine I’m not too thrilled knowing my station is not always running 24/7.

That doesn’t help me already being behind when I’m trying to do this at an extremely busy and tiring time at work. I’ve seen my ratings so far and they’re not as good as I would like. However, when I see the relatively large amount of people all over the world that have already listened to my station for more than five minutes, I just have to wonder if its the downtime killing me of if my station is simply not good enough to stand out among the plethora of other "oldies" stations and keep people listening.

So…this is what’s on my mind as I return to my computer on Saturday night and prepare to figure out what I want to do next to improve my station. Before I got started, I saw I had a few new e-mails. One had a subject of "@CoalDominion has mentioned you on Twitter".

This is "imperialgoogie" who was (and, still is) one of my most favorite people on Tumblr with his blog there, The House of Googie. He’s pretty interesting as he has a great wit he uses to caption his retro/vintage posts and has fallen in love with "mid-century modern" stuff all the way down in New Zealand and has only recently hit the tender age of 21. He’s highly talented with graphics whether it’s his amazing logos made for his blog or making a spoof of an old advertisement (which he did at key times when I was on Tumblr during various controversies, especially his funny-but-still-making-the-point "not giving post credits = Communism" poster).

So, I open up the e-mail and it shows the text of his tweet — "I was bored." Nothing else showed up in the e-mail so I went to the notifications. It was there that I first beheld this glorious spoof on an old RCA/HMV ad.

Every single area has been hilariously altered to fit my station and hardly any detail has been left out — from my use of "jiggly-bytes" to the computerized voice tracks I am using. It’s amazing work…and so appreciated by me that I truly cannot continue to assign any further words to it without getting misty-eyed or maxing out my credit cards to fly to New Zealand to give him a bro hug for making me feel so much better when I felt like this whole effort might be a three-month waste of time.

All I will add is this. Despite all of the trash it generates, the Internet is still a pretty interesting place. Here is somebody I have never met in person (and, probably never will) that’s from another hemisphere across the International Date Line, 30 years younger than me, and leans more to the right in politics while I lean more to the left. With all of those differences and I’m sure plenty more, here we are enjoying material from even before my own birth…and, even beyond that, here he sits making this detailed piece of fan art for my struggling effort to start and maintain an online stream of music that hardly any over-the-air radio station will play anymore. That’s pretty damn special and a good reminder to me, the more-than-occasionally grumpy bear, that the world isn’t such a completely bad place after all.