Sadly, today’s world is filled with information that has to be looked at with great suspicion.  It seems like everybody with an ax to grind or an interest to protect has no qualms about trying to lean public opinion in their direction no matter the cost in money or honesty.  Very often, this type of misinformation and deception is purveyed under the guise of some sort of research institute…or, at least something that sounds like a research institute.

Thus, even though I would automatically tend to believe what is presented in the chart below, I still went looking for who exactly is the American Energy Innovation Council.  You see, even though my beliefs about how we should handle the USA’s energy needs and the question about climate change tend to lean toward the left side of the political spectrum, I still want to know that there is some independence behind the information.  After all, as we have seen, the left can be just as bad at stretching the truth over these issues as the right.

Of course, there will still be those that want to dismiss any information that is contrary to what makes them feel comfortable or feeds their anger over their current situation in life.  It’s a sad day when so many Americans can never admit that, sometimes, a person form a different political outlook has a good idea or is telling the truth.

However, for those like me that, despite political tendencies, want to find out the truth about things before taking a position, independence is key.  Even better is seeing those that are known to lean one way come out and show that their party is just plain getting it wrong on a certain issue.

No.  Try this on for size.  It’s the chairmen and CEOs of Lockheed Martin, Xerox, General Electric, Cummins, and Bank of America…oh, and some other guy named Bill Gates.  That’s not exactly a group of men who always (if ever) cast their ballots for Democrats.

This gives me the confidence to safely say that this chart can be relied upon to tell the truth.  If anybody still wants to be angry at why fuel prices continue to rise or the price and convenience of using alternatives to oil and coal being such a big, fat pain in the ass  — and all while the big oil companies continue to reap record-breaking profits during the biggest economic downturn since the Great Depression…well, maybe it’s time to wake up and stop drinking the Fox News Kool-Aid on this one.  Maybe, just maybe, it’s time to think it might be a good idea to eliminate tax breaks for the oil and coal industries if they don’t invest more in research and development.  Perhaps it would even be wise to take the newly-gained federal revenue and turn it over to our plethora of research institutes to get as many of them as possible working on this problem.  Most of all, even if one still does not believe that global warming is man-made or even exists at all, wouldn’t it be nice to tell people like the King of Saudi Arabia, Hugo Chavez, and Vladimir Putin that they can stick their oil where the sun don’t shine?

So many Republicans today believe that too many people are getting a free ride on their tax dollars and are not contributing to American society.  I agree.  Unfortunately, the GOP’s anger is misdirected.  If that anger was aimed at how badly the oil industry is robbing the US Treasury and how their actions are so badly hurting both the economic and military security of the USA, they just might realize that the “problem” of welfare mothers and the influx of Mexicans is comparatively very small.

So…just take a good look at this chart and spend a moment thinking about how much our oil and coal companies truly serve and love this country.  No, I don’t expect them to be charities or that they should be taxed more than any other industry or person.  However, when they know full well how important they are to almost every aspect of American life, one would think they would invest in something a little bit more substantial than television commercials. 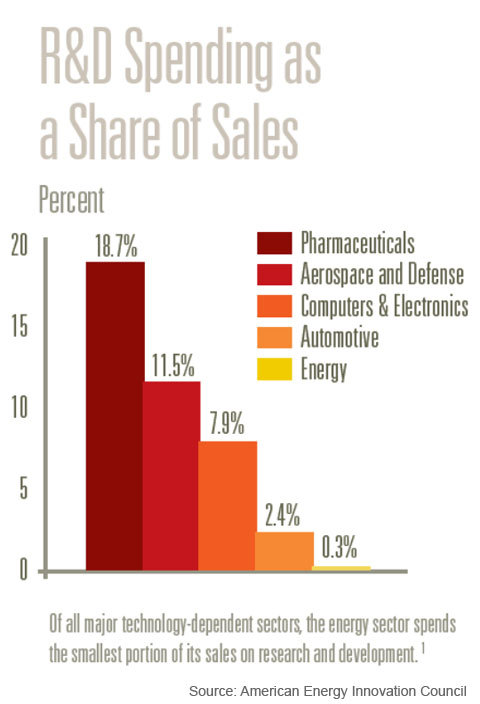 Credit for bringing my attention to this graph and the whole story goes out to crooked indifference.  The best overview is at Climate Denial Crock of the Week in a post titled, “Graph of the Day: R and D Spending in the Energy Sector – and Chevron’s Irony Deficiency.”  The American Energy Innovation Council where one can read its full report titled, “A Business Plan for America’s Energy Future” can be found at www.americanenergyinnovation.org.