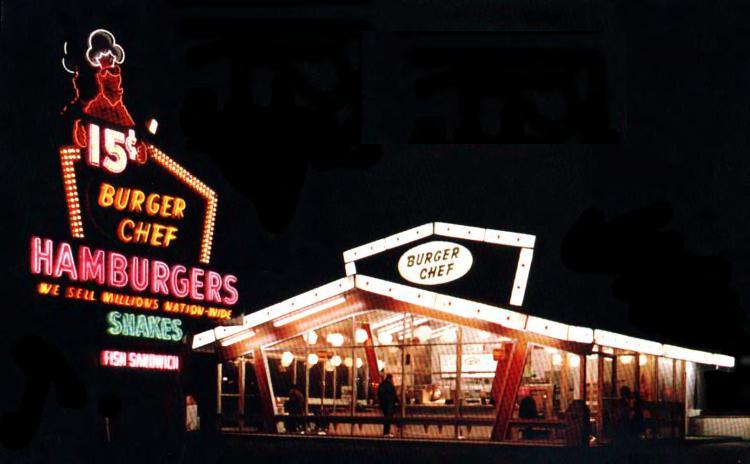 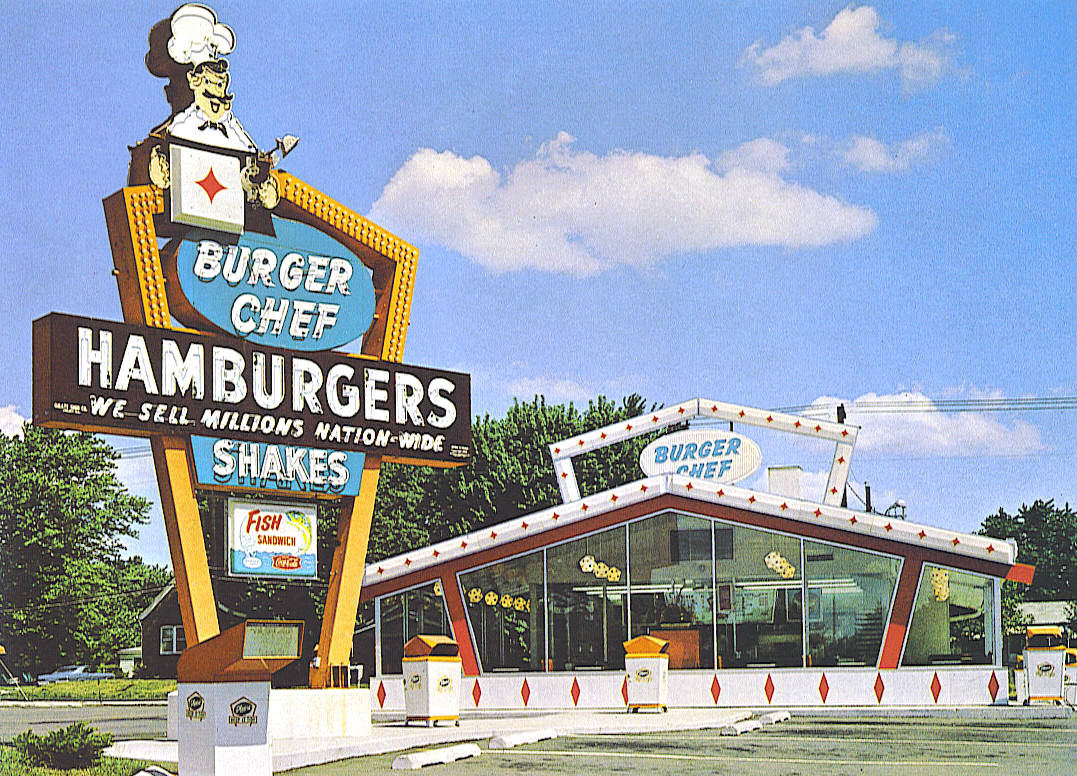 Even before an old location on "my" stretch of U.S. Route 66 in Rialto, California was resurrected for the 2014 season finale of Mad Men, there has been plenty of nostalgia and curiosity regarding Burger Chef.

For those old enough to remember Burger Chef, this is not only because it disappeared so suddenly from most American towns after having at one time been second only to McDonald’s in the number of locations. It is also due to the chain often being so ahead of its time in regard to menu options.

For those that never had the opportunity to eat at Burger Chef, the appeal of its various designs and advertising campaigns — especially the clean and futuristic-for-its-day sky blue with orange diamonds on white decor — have somehow transcended time. It continues to draw in those tired of the blandness of most of today’s fast food and "fast casual" outlets or seems a desirable although lost alternative to the chains that have taken their marketing well over the edge of previous standards of good taste.

I could easily go on and on about Burger Chef, its food, its rise, and ultimate decline and disappearance under poor management. However, in this case, the Wikipedia article on the chain is a good albeit short overview of its history. In addition, there is the spectacularly fun (if old-school designed) Burger Chef Memories website run by Kyle Brown of Louisville, Kentucky who is the son of one of the former area franchise managers. Mr. Brown’s site is a treasure trove of old Burger Chef photos and memorabilia. It even has four pictures from the location in the Okolona neighborhood of Louisville that I ate at as a little boy for three years before my parents and I moved away from Kentucky.

With all of that available for everybody’s visual consumption, there is no need to go into a full history lesson. Obviously, poor corporate decision making along with some bad luck resulted in Burger Chef’s failure. This is despite how the chain was often an industry leader in cooking methods plus its introduction to the fast food industry of the salad bar, condiment bar, "value combo" meal, and the now ubiquitous kid’s meal. Perhaps among the company’s many management mistakes was that, sometimes, it was just too far ahead of American tastes and expectations.

Then again, maybe it is for the best. Having dwindled down to almost nothing before its ultimate demise in 1996, Burger Chef never had to answer the questions today’s fast food behemoths must face about food quality, the environment, worker salaries, animal treatment, health concerns, and political correctness. Instead, it gets to remain back in that time when dad bringing home a sack from Burger Chef was a rare treat for the kids and an even more rare break for mom…memories of nothing but good feelings.

While McDonald’s no longer makes us happy with its meals, Wendy’s no longer stands for old fashioned, and the list goes on and on, thoughts of Burger Chef bring only a smile. Today, we don’t remember the last time the food was bad, the order was brought out wrong, or the bathrooms were a mess. We just remember the big signs, the unique interiors, and the look of the cars in the parking lot.

In a way, while it lost the corporate battle, Burger Chef won the fast food wars as it is now first in the hearts of many people including quite a few that never ate there. It will remain the place that everybody loved whether they were young or old, rich or poor. It will forever stand as the fast food chain that we all wish was still around from the times when things were done right and service came with a genuine smile.

Just like a religious tale, Burger Chef achieved perfection in our minds only through its death…and, just the same, many of us will preach its virtues and die ourselves waiting for its return…for it shall not return no matter how much we want to believe in it…but it helps to believe in it because it speaks to the good inside of us Capitalists that want to always have faith in the good merchant who will send us home having had a happy experience without overcharging for it.

Thus, praise Burger Chef and glory to his son, Jeff. 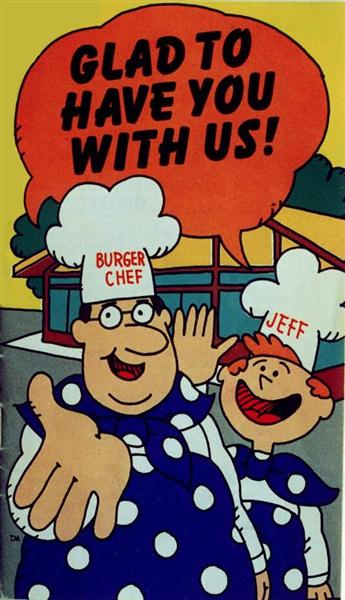