It has not made me very happy to have gone through so much crap to escape GoDaddy followed almost immediately by Name.com and then go so long without slapping something up here.  Pretty much every weekday after I made my last post has been so busy that I have come home, eaten, barely looked at the Internet or watched any TV, and crashed.  The weekends have been spent simply recovering from the insanity that is my workplace run by two people that refuse to truly work as a team and, all too often, end up unintentionally working against each other.

However, I still prefer that type of insanity where I can actually see and occasionally control it than the other madness in which I have tried to involve myself — buying a house.  If there was ever a real-life manifestation of the game of Fizzbin that Captain Kirk made up in the A Piece of the Action episode of Star Trek, it has got to be the world of home financing.

As most people reading this will know, I cannot do this on my own without assistance.  This is especially true since The Great Recession forced me to take a job where I took a 42% pay cut from my previous position.  Yes, that is not a typo…forty-freakin’-two percent.

In addition, I certainly knew this process would not be easy.  I was well aware that not even a proctologist would look as far up my butt as a bank and mortgage company would.

Still, I have gone through all of the hoops and dug up every possible piece of information these nosy busybodies have asked of me…and it’s still not enough, but not because I don’t make enough money.

Here’s the deal…I am trying to do this under the HomePath program run by the U.S. Government-owned Fannie Mae home mortgage corporation.  Through this, I do not have to put down the usual huge down payment or deal with many other of the usual hassles and expenses one would go through in a more normal home purchase.

The idea of the HomePath program is to get people into houses that have been empty for a long time so they do not contribute to the deterioration of the neighborhood.  As we all know, millions of people have lost their jobs over the past four years in the U.S. and, thus, hundreds of thousands of homes have been foreclosed and sit empty.  With the final resolution of a settlement between our major banks and the U.S. Government having just happened, a new flood of foreclosures is on the way even as the economy has finally begun to improve (albeit slightly).

So…here I sit with excellent credit, a good job where I have already been promoted into management, sit in the middle of the Inland Empire area of California which was ground zero for the mortgage crisis that started this whole mess, and HomePath supposedly eager to get those homes filled to save the neighborhoods (with the unstated addition of getting me to start paying property taxes and help out whatever city the house is in…which is certainly fine with me).

But…they won’t approve me right now and probably won’t until early 2013…by which time various things are already scheduled to be changed that will cost me thousands of dollars and might end my dream of buying a home.

Despite the fact that HomePath is supposedly trying to help people after the economy crapped out, they won’t help anybody that was affected by it…that means me who, through no fault of my own, lost my job and happened to live in one of the few areas where, for a time, the unemployment rate was higher than it was in Detroit after so many auto workers were laid off.

That’s right…because I took unemployment benefits for so long…despite the fact that, during that time, I paid every bill on time and in full including my car payment and four credit cards…ignoring the fact that I have shown all of my receipts from 2010 when I hit the road in a desperate search to find employment elsewhere plus did web design and computer repair on the side to keep busy and try to not become a drain on society, I am deemed unworthy by HomePath and the banks that work with them.

Unfortunately, this continues a pattern that I have seen all too often in my life when it comes to the government.  Whenever I need assistance, I always seem to make just a hair too much money or, through no control of my own, fall just short of some needed deadline or requirement.

It is extremely frustrating.  While wrong of others to feel that way, at least it helps me understand the more hate-tinged people in America’s political world today that gripe incessantly about how “those people” get all kinds of handouts from the government and they never get anything but a higher tax bill.

The way I see this is totally different as I have observed this HomePath process very carefully over the past four months and have come to the irrevocable conclusion that it’s not “those people” being able to take advantage of this program.  Instead, it is actually the same kind of people that got us into the mortgage crisis in the first place…the speculators, the banks, and the loan officers.

I do not want to describe the whole process as this bitchy rant is long enough already.  I will just say this…pick a well-populated county with a lot of foreclosures to watch on the HomePath website and notice how they come on and off the market, especially the timing.  Then, also keep an eye on the same area in any other regular real estate website.  It will not take too long for it to become apparent that, even though it is clearly and strictly forbidden for speculators and re-sellers to participate in the HomePath program, they are doing so in droves.  This results in people like me being squeezed out or being forced to pay artificially inflated prices for homes that are truly not worth the selling price even in the already expensive populated areas of California.

As with everything else, it’s a good government idea and program that has no enforcement behind it; thus, it gets badly abused…and again it helps me slightly understand those that say government cannot ever be trusted.  The sad thing is, the people truly believing that never can understand this kind of problem only gets worse if the government doesn’t get involved as speculation and mortgage shenanigans would again run rampant making it not be very long before another housing market bubble and its inevitable collapse.

The “free market” in a country as big and economically strong as the United States (even in a recession) is like the Mississippi River.  It is beautiful, magnificent, powerful, and even tranquil during times of the even inflow of water from its many tributaries.  However, as many painfully learned through the first centuries of Caucasian settled life along its banks, too much inflow of water — or, shall I say “capital” as water is a river’s currency — combined with lack of some control of where it was allowed to flow resulted in much misery.  Over time, it was learned how to harness the river to keep it from overrunning other things that we value.  Of course, over that time we have also learned that the river can be controlled too much.  Too many dams and levies — regulations — choke off necessary natural growth.  That lesson has been learned as well in some places and, in appropriate spots, barriers have been removed and the river — “commerce” — is once again allowed to take an unfettered course.

It’s all about balance and control.  Sadly, we have a segment of our power class that has become so hungry for more of that power and the money that comes with it that they refuse (through their bought-and-paid-for minions in the U.S. Congress and state legislatures) to allow government funds to be allocated for enforcement of many of the laws that would make government programs like HomePath work properly.  With that, we end up with the historically-unprecedented-in-America imbalance between what the Occupy Movement has called the 99% and the 1% that only gets wider while we all get suckered into arguing about things like birth control that most sane people thought had been resolved and put to bed 30 to 40 years ago.

I do not have an answer for this one because so many people are scared shitless now over what Candidate X would do if elected (or, reelected) to the Presidency and what it will mean in 2013 and beyond.  Thus, most will stick to the same two choices in the upcoming elections more to keep “that guy” out of the White House and other seats of power than voting for somebody.

That’s a bad way to face an election.  It is certainly not sticking it to The Man and only gives him more ways to stick it to us.  It is indeed like Fizzbin.  It seems there is no real way to win it unless one is prepared to drop the cards and punch somebody in the face.  I don’t know about anybody else, but I have found that does not work very well with either bankers or politicians as they tend to also control the police who are more than happy to then come control you. 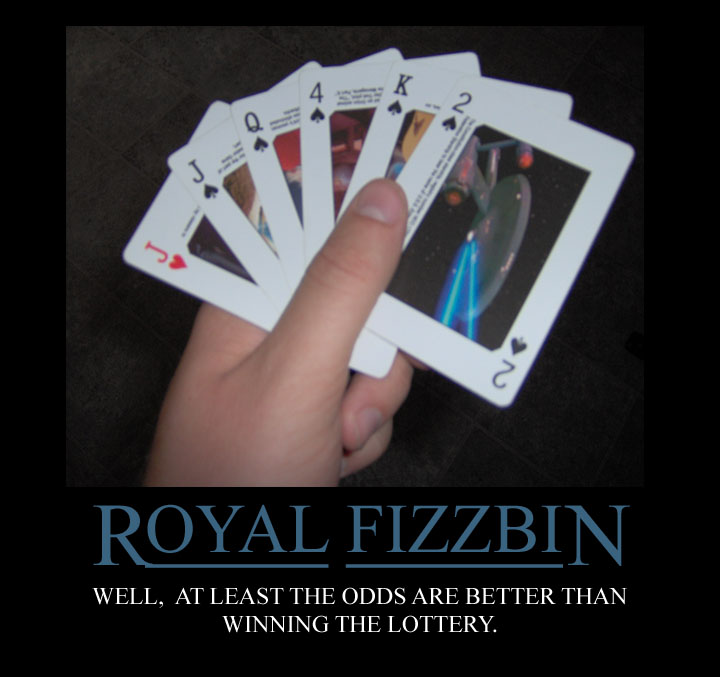