Image • 2016.05.162016.05.16 • KoHoSo
Over the past few weeks, I’ve been watching Jordan of The House of Googie play Fallout: New Vegas on his ParAvion2000 channel at Twitch. This has been fun for a lot of reasons but a big one for me as somebody quite familiar with Las Vegas and the Mojave Desert is being able to tell Jordan as a curious New Zealander what is real in the game compared to the actual landscape, towns, and buildings (which is a lot!) and what the things that have been renamed actually represent.

For those unfamiliar with the Fallout series of games, they are a very odd blend of the far future after a nuclear war that somehow has a lot of leftovers from the 1950s. This is how one can be seen fighting enemies with a futuristic energy weapon while Big Iron by Marty Robbins plays in the background on one of the fictional radio stations.

With both Jordan and me being fans of the mid-20th century, there ars lots of design elements in the game that get our attention. One that specifically caught my eye was this "Poseidon" filling station design that appears in several areas, this one being near a condensed mash-up of the famous "Welcome to Las Vegas" sign and what the game calls Camp McCarran (McCarran International Airport). 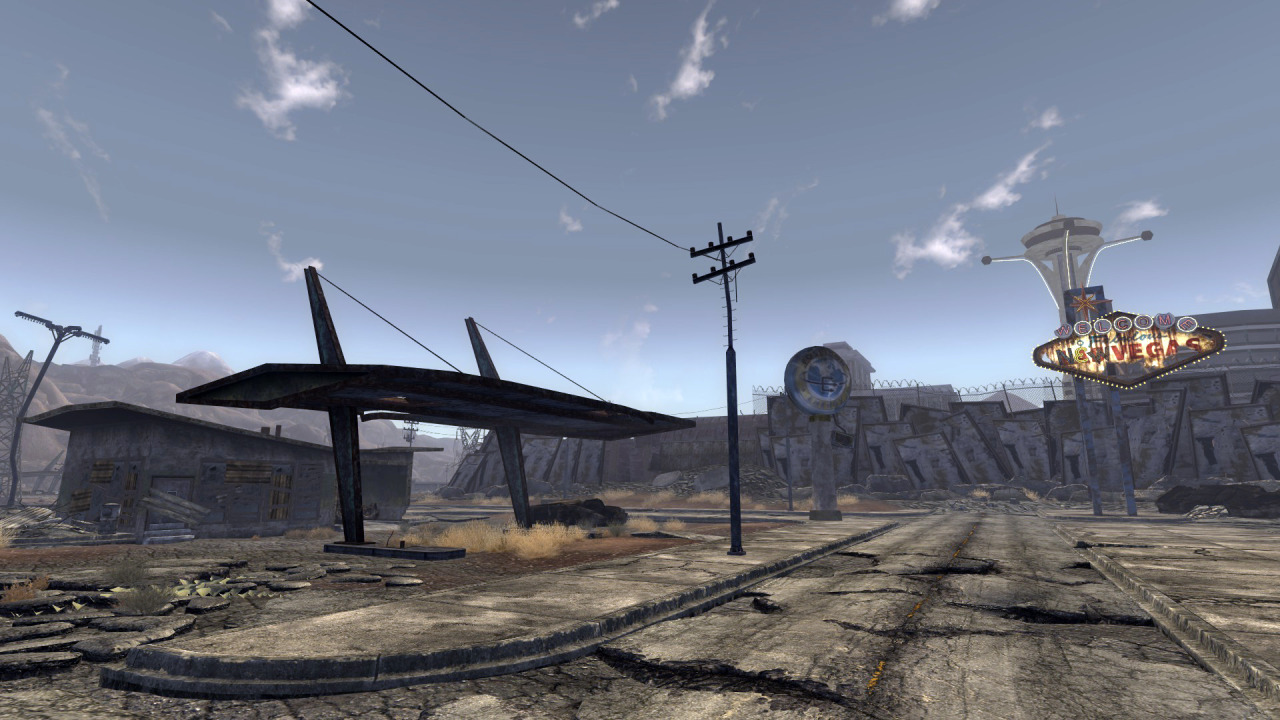 Living in California for so many years especially in the greater Los Angeles area, I had seen this style of canopy and building many times. Unfortunately, most have been torn down or remodeled. The few surviving ones have mostly been converted into auto repair shops, used car lots, and other such businesses. What was driving me nuts was I could not remember who originally built these glorious little bits of googie architecture. After a little digging on the internet, I found the answer. 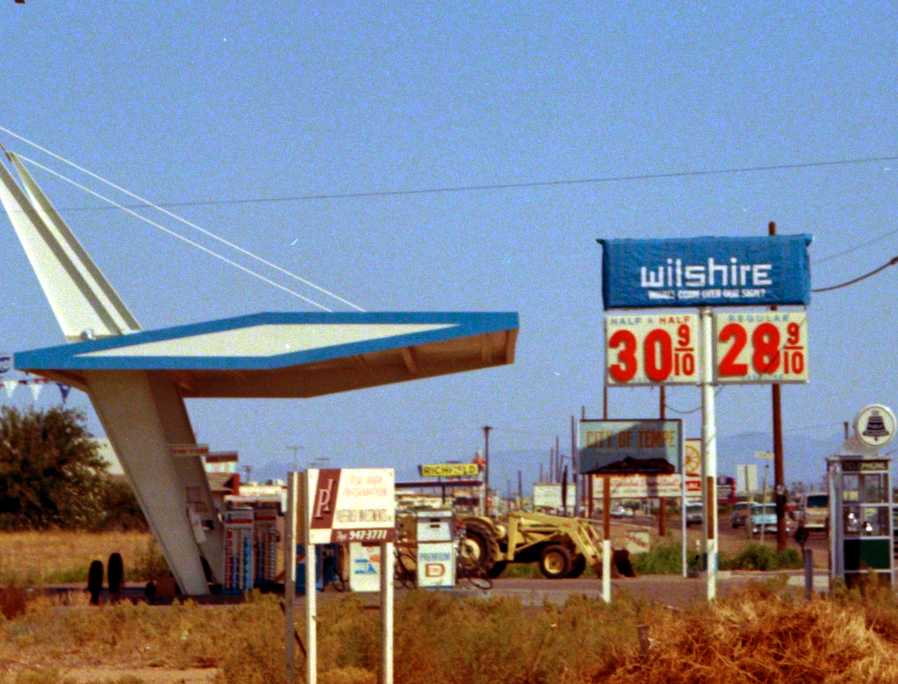 The brand that brought us this great diamond-shaped canopy suspended off angular supports was the Wilshire Oil Company. Wilshire began in 1917 and, though its years of being an independent company, was based in Los Angeles. It was a long-time supplier to Associated "Flying A" stations in the western U.S. and was the company that bought out two famous early brands in southern California history, Polly and Sunset. 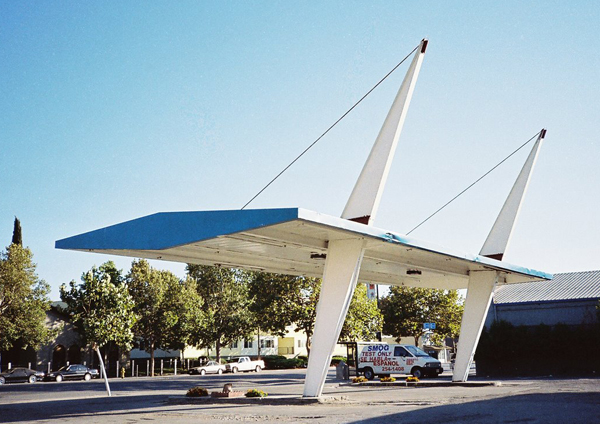 The canopy shown above that still stands abandoned in San Jose was built in 1960. This seems to be the starting point for this design. This was also the year when Wilshire was purchased by the original Gulf Oil in order to give that company a presence in the western United States. The design continued to be used well into the 1960s as can be seen on this map back cover from 1965.

As consolidation in both the oil industry and advertising began to take hold in the later 1960s and early 1970s, Gulf phased out the Wilshire brand in favor of its own name. There are sketches of this canopy design being used with Gulf signage but no proof one was ever built that did not have the Wilshire name on it first.

By the time the original Gulf fell apart and its western U.S. operations went into the hands of Chevron, most stations built as Wilshire had already begun to disappear. Many were likely lost due to station owners’ needs to add a convenience store and/or have the property fully excavated due to California’s major push to prevent the gasoline additive MTBE from getting into groundwater. Only a very few remain including this extremely rare triple-support version in San Diego that still serves as a filling station (but sadly now without its diamond-shaped canopy). 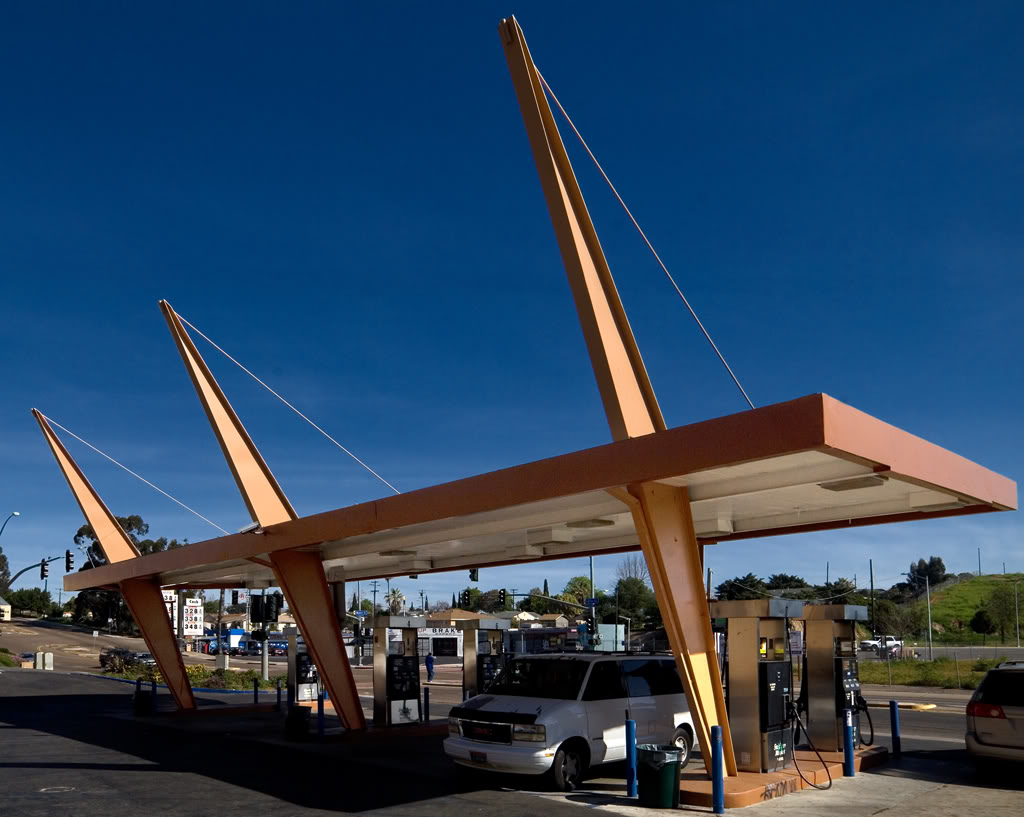 I find it quite interesting the designers of Fallout: New Vegas chose the Wilshire googie design over others that were more famous and widely-known such as those by Phillips 66. Then again, perhaps whoever "built" the station lived in an area where one still existed or is just a googiephile like Jordan and me. Oddly enough, I seem to be the first person to note this connection online so, as of now, no public note has been made on the source of inspiration.

However the old Wilshire station made it into Fallout: New Vegas, it’s nice to see the game perpetuate some Space Age architecture in addition to all the old music it brings back to a younger audience. It keeps my hope alive that it will inspire the coming generations to design and build for a better tomorrow in their own, fresh way that does not perpetuate today’s bland squares of boredom which generate no inspiration or brand loyalty and just plain have no soul.