Floating around the Internet these days especially at places like Tumblr are info-graphics about the agricultural biotech company Monsanto and the genetically modified organisms (GMOs) they are providing to farmers and, thus, to many major processed food companies in the United States.  Most of these call for a boycott of foods that use GMOs and list quite a few major brands so people against this stuff can avoid it.  I would post one of these here as an example but the ones I have seen are not very well done or readable.  Besides, anybody that has known me for any amount of time or bothered reading this on-and-off again blog knows I love making lists.  I figured I would think about making my own — something similar to the “NRA travel boycott” since many of these brands are under much larger conglomerates.

So…I found one of these anti-GMO info-graphics that had its list in alphabetical order to use as my base.  What I wanted to do is go through this list to get the parent corporations and then list the brands under their corporate umbrellas.  Well, before I even finished the letter H, my tab bar in Firefox was already overflowing.  Perhaps worst of all is that this list covers almost every major brand of food sold in American supermarkets.  It would almost be easier to list the major brands not using GMOs.  Even taking that route would be tough because I have found that the info-graphics circulating on this issue make some major omissions…one big example being that they all list Coca-Cola and PepsiCo but fail to mention Dr Pepper Snapple Group (that corn they all use to get high fructose corn syrup is a big-time GMO).

This brings me back to something I have said here many times about boycotts — they are hard and not everybody can participate in every single one.  Sure, most of us would like to take the advice of people such as Alton Brown (and many others) and make as much of our own food as possible even down to basic condiments such as ketchup and mayonnaise.  The problem is, the world we are all pretty much forced to live in with unyielding rent or mortgages, inflexible work schedules, and damnable commuting choices doesn’t lend itself to even thinking about doing everything ever shown on Good Eats.  Then, add on somebody like me who shares his house with just the little woman.  We could never eat everything like that before it spoiled and wasting food is an even more terrible transgression against both society and Mother Nature than eating these GMOs.

I have also spent much time wondering whether or not GMOs in and of themselves are as bad as some say.  Putting aside just for a moment that anybody with even the slightest lick of common sense knows that Monsanto is one of the most evil corporations to have ever existed on this planet…well, after all, humans have been intentionally modifying the genetics of both plants and animals for thousands of years.  Perhaps the most apparent result of humans performing genetic modifications is none other than man’s best friend, the dog.  Anybody that wants to tell me it was a terrible thing for humans to have developed the corgi can just get the fuck out of this blog right now!

Of course, that is taking the argument to a ridiculous extreme.  Everybody knows what one is going to get with selective breeding of dogs and other animals and that the result can be easily controlled.  Still, that is exactly what has been going on for many centuries whether it be monks from ages ago trying to develop grapes that would make better wine to the more fairly recent work of people such as Luther Burbank.  It’s all the same thing as it was before, trying to get a better result whether it be a different flavor, something that lasts longer, resists pests, or results in a higher yield.

However, aside from Monsanto’s deplorable corporate behavior which makes anything that company does throw up a red flag to any informed citizen, the difference is this.  All of those previous “alterations” in plants and animals were performed through cross-fertilization.  This is a natural process in and of itself although sped up and manipulated by humans.  If nature allowed the crossing of two types of DNA, the result lived.  If not, it died.

What Monsanto and others are doing is forcing genetic change.  They are using technology to change DNA in ways that might not happen in nature.  Then, the time for such things to be approved by the U.S. Food and Drug Administration is so relatively short that nobody can truly know what effects the introduction of such organisms into the open world are going to be.

This is not about some hare-brained fantasy about how a certain strain of Monsanto wheat might turn into a Godzilla-like creature.  What this is about is the much more subtle things that will happen.  Of most note in this area, how human bodies will react to such foods and how these new plants interact with the rest of nature…especially with bees.

I’m sure most people reading this have heard or read at least one story about a sudden and significant decrease in the bee population in what is called colony collapse disorder (CCD).  It is an issue that, sadly, is not getting the attention it needs from the mainstream media because most people see bees as nothing but an annoyance.  The fact is, if the bee population continues to collapse, so will food production and that will lead to a problem bigger than anything most people could imagine…something far worse than “Attack of the Killer Wheat.”

Unfortunately, there is not one simple cause of CCD.  However, GMOs are a part of it.  This is because, in some plants, they have been modified to generate their own pesticide and this is killing many of the bees.  In other cases, the modified plants have changed their protein structure to a form that is not as easily digestible as before.  This is not only killing bees but is, perhaps, one of the explanations for the significant increase in the rate of colon cancer in humans.

The biggest problem of all in this mess is that heaven forbid we should all let the world’s scientists sit down and do a big, thorough, unfettered study on how GMOs affect bees, humans, and the environment as a whole.  We would probably find out which methods are causing us harm and which ones are doing us a great service.  Of course, this gets in the way of Monsanto’s reputation, power, and — the root of all its evils — profits.  If they only spent one-tenth of what they do now on lobbying and political donations and put it toward honest research, we could probably find most of this out relatively quickly and Monsanto would still be making plenty of money to satisfy its board and stockholders.

But, alas, that’s not how things work these days.  Nobody can ever slow down to make sure everything is OK, admit that something doesn’t work, or — worst of all — temporarily inhibit cash flow even if the future of food production and perhaps even the long-term survival of the human race might be on the line.

So…what should we all do?  What can we possibly change while stuck in this modern world where even a rural dweller such as myself cannot escape it?  Do we leave behind every single bit of our free time to make all of our own food from scratch as if we were reliving Little House on the Prairie?  How can we trust anything from the supermarket when generic and store brands along with stuff even from the esteemed Trader Joe’s chain are often made by the same companies already known to use GMOs?  How can most people afford to buy those few brands that expressly do not use GMOs?  Is there any possible way in this case to stick it to The Man? 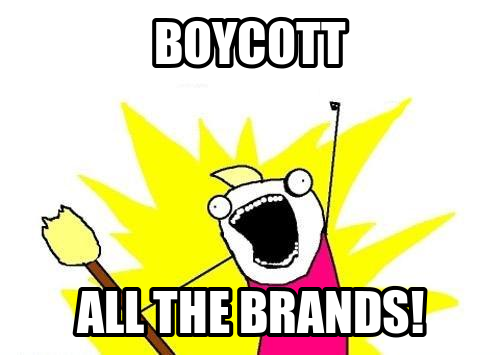 Could we all survive on just Tom’s of Maine toothpaste?

See what I mean?  The Man has already stuck it to us good on this one and most people didn’t even notice.

All I can add is that, if anybody reading this is going to try to spread the word, don’t waste your time on Tumblr, Twitter, Facebook, or any of the rest.  Start with moms.  Even in today’s world, it’s still moms that are mostly in charge of food.  If we turn moms against GMOs, Monsanto’s world will crumble.  Yes, even The Man will tremble when faced with The Mother.