Image • 2010.07.042017.02.10 • KoHoSo
Back in the old days of the United States of America before so much of it became an over-regulated, cookie-cutter mish-mosh of blandness, there was a time when giants ruled the land.  Big cars rolled across the landscape and, very often, the signs designed to attract travelers desirous of food, entertainment, sleep, and other services were just as outlandishly huge.

Of course, not all of those things of the past were bad to leave behind.  As certain cities and towns grew, signage became so big and overdone that it eliminated the real personality a place had and blocked the view of any of its surrounding natural beauty.  The country also got to a point where some of the old ways of attracting business became passé and downright un-cool.

During the rise of the Interstate Highway System and McDonald’s, many of the old giants of the past began to be sent to the scrap heap.  These included beautiful neon signs, Sinclair Dino dinosaurs, juice stands shaped like oranges, motels shaped like big tee-pees, and — perhaps most famous and prevalent of all — the plethora of Muffler Men and their various offshoots that once dominated many a roadside.

Thankfully, not all of these giants have been lost.  With a wave of nostalgia that has it roots in when the last section of US Route 66 was finally decommissioned in 1984…well, some people began to realize some of the memories and fun that had been lost.  Later, with the advent of the commercialization of the Internet, more and more people began to seek out information on the old roadside attractions of the past and, better yet, started organizing to preserve many of them.

In other cases, some businesses refused to yield to modernity.  Their giant sign or cheesy mascot was going to stay and that was that.  They would not make the mistake of designing a new logo or trying to reformulate themselves in any way.  That is what I have here for today’s K-POD.

Harvey Marine is a business located in Aloha, Oregon (pronounced AL-o-wa) which is a western suburb of Portland.  Placed right up on the edge of what is known locally as the “TV Highway” (short for Tualatin Valley), it has been serving boaters of the area for many decades.

Whether one likes to boat upon the local waters or not, Harvey Marine is a local favorite and even nationally known — not just because of it service or prices but because of its appropriately-named giant mascot who’s toes almost touch the road itself.

This particular animal might seem like a strange choice to many.  After all, when thinking of boating, one usually conjures up images of fish, frogs, and birds.  However, for those that like and/or remember classic movies of the past, it doesn’t take long to find out that Harvey is extremely appropriate.

I like that Harvey sits in front of the US flag especially as this photo was taken earlier today on Independence Day.  It’s a weird but nice reminder that this country was founded on individuality and that not everybody has to be “extreme,” live in a cookie-cutter existence, or morph their company into a name and logo that means absolutely nothing…as I still await an answer as to exactly what a Verizon is.

So…on America’s birthday, I salute Harvey and all like him.  May Harvey and all of his fellow giants continue to stand proud while simultaneously sticking it to the man by pissing off yuppies on local planning commissions. 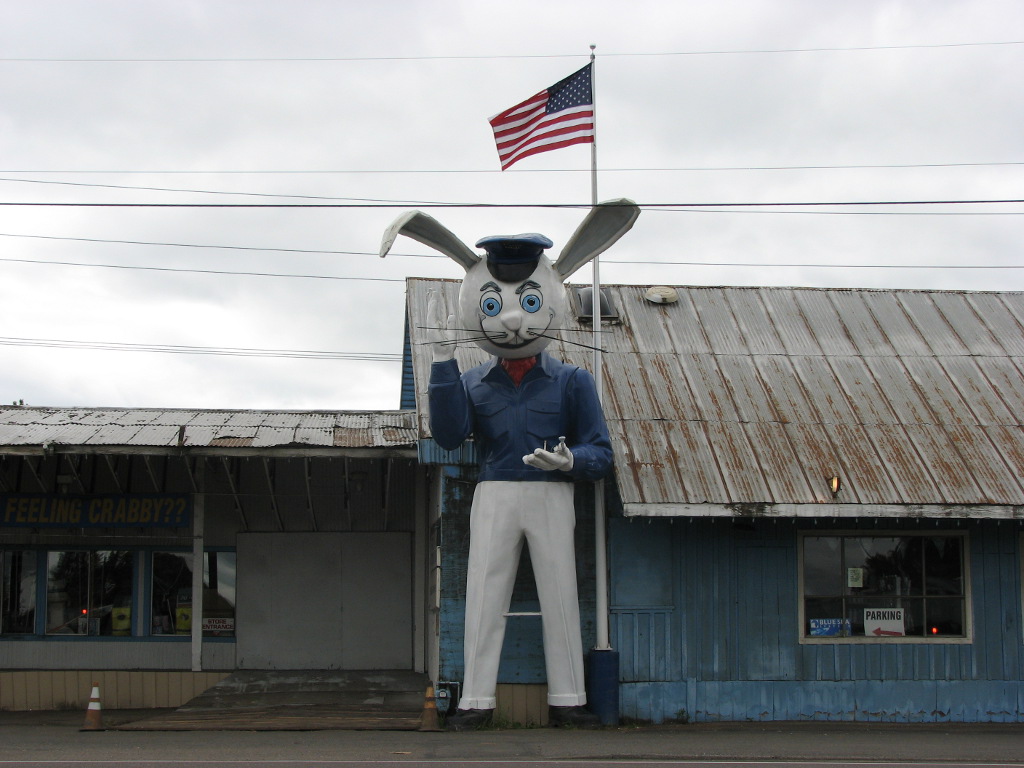