Image • 2010.07.052017.02.10 • KoHoSo
Over the many years that I can remember traveling over America’s roads, I have seen a lot of things beside them that have attracted my attention.  This runs the gamut from solemn monuments to silly things like Harvey to the hilarious of those few poor souls that just cannot make it far enough off of the road to not be seen taking a badly needed whiz.  However, I don’t think that I have ever seen a town display something quite like what I have for today’s K-POD.

I was on the last leg of my tour of the greater Olympia, Washington area and heading up Washington State Route 3 into the very nice little town of Shelton.  Upon approaching the city from a hill that overlooks it, I saw this giant wheel and, at the last moment, realized that there was a little pull-out from the road so it could be viewed more closely.  As it turns out, this is an amazing piece of historic machinery.

The “Big Wheel” is left over from the days when the timber industry ruled the Pacific Northwest.  It was originally used elsewhere to saw spruce logs used in airplanes built to fight World War I.  It came to Shelton in 1926 and remained in use until 1967.  It is one of the largest saw wheels ever built at 11 feet in diameter (approximately 3.35 meters).  During its time of use in Shelton, it sawed through three billion board feet of lumber which is enough to house over one million people.

While the timber industry is still important in the Shelton area, it is certainly not to the extent of days past when things like the Big Wheel were needed to slice up the huge trees left in the old growth forests before the remainder were set aside for preservation.  Yet, Shelton has made sure that this part of its past is not forgotten.  While we all know better now about the logging practices of the past, there is still nothing wrong with being proud of their once mighty sawmills and how they helped to build this country.

The Big Wheel may no longer turn but it still serves a great purpose as it greets residents and visitors alike with a message of, “I got your attention, didn’t I?  Now look at that nice little town down there!  This is where it came from.  Now, come on down the hill and see what we’re up to today!” 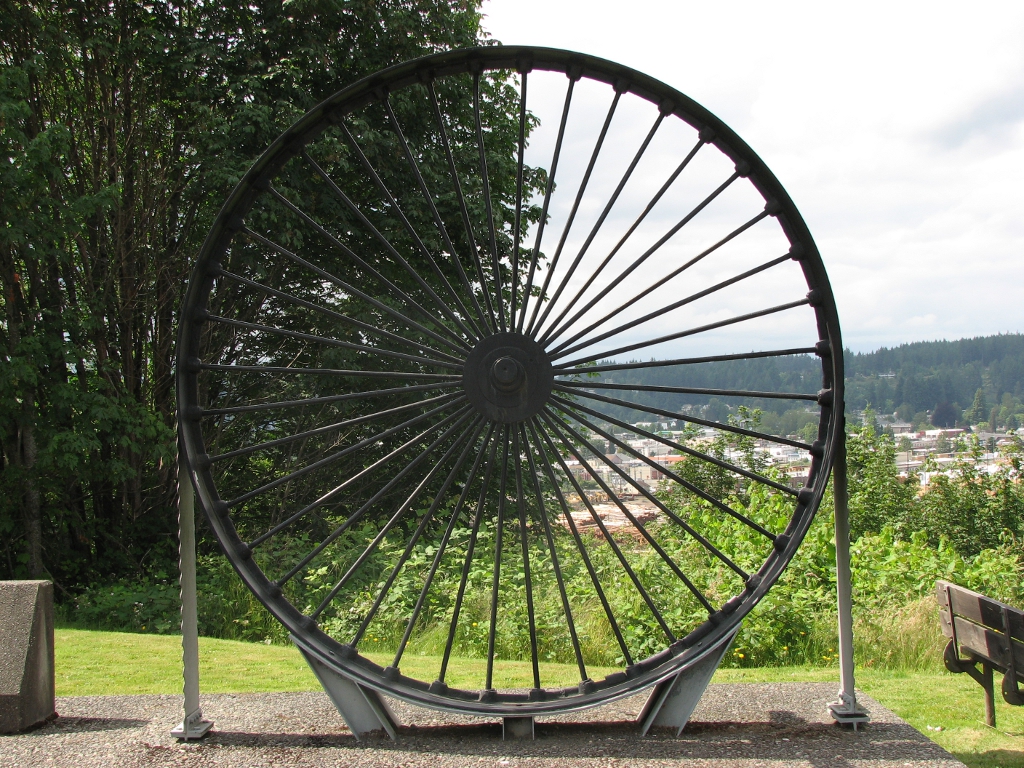 The Big Wheel in Shelton, Washington USA – Copyright © 2010 by KoHoSo