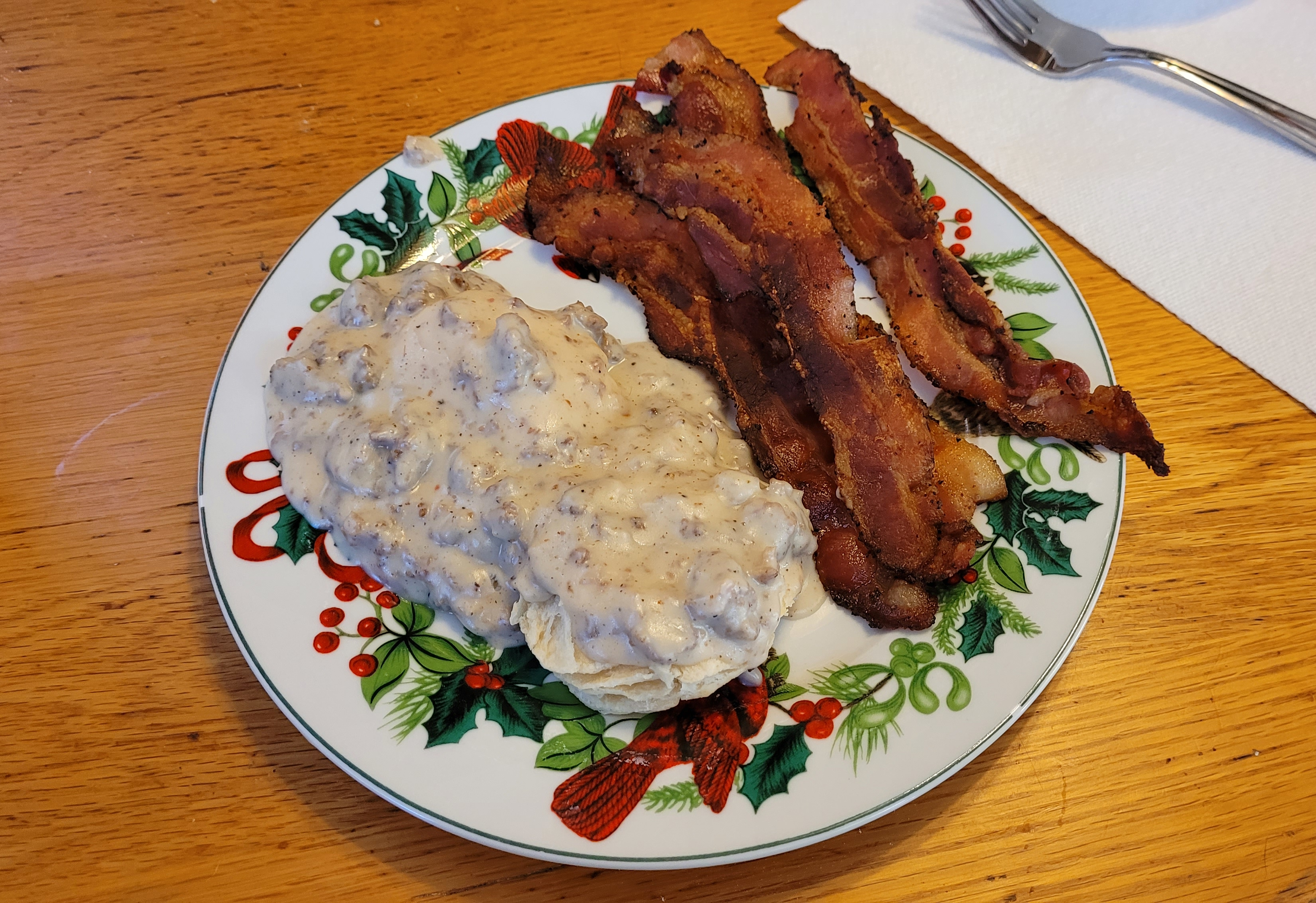 As everybody except their authors hates the seemingly never-ending trend of online recipes that come with a story longer than War and Peace at the top and your finger has cramped up before you finally scroll down enough to find out how to make the darn thing, I’m going to give you the PDF version of the recipe right here. It also doesn’t have any cuss words which you will see below if you keep reading this post (I cuss a lot when I cook both for fun and frustration so it’s quite appropriate).

Now, and only if you want to read it, here’s what I have to say.

First of all, it has been far too long since I last posted a recipe other than those included in an old ad…and, even then, that last one I did needs to be redone. While cooking is never going to fully take over KoHoSo.us, I do hope to get around to posting more recipes.

While this recipe is fully my own, I especially want to get to those that Miss KoKo and I have worked on together. Our combined cooking knowledge, experience, and curiosity has really brought some recipes to our table that I feel are well worth sharing.

I began working on this recipe in 2010 and pretty much finalized the ingredients not long after the first version. Most of the extension of the copyright has been due to me rewriting and reorganizing the instructions for others so it makes sense, particularly in regard to how the flow of cooking this gravy actually goes.

I finally got motivated to bring this recipe here thanks to the photo up top that I took on Christmas morning. It received quite a bit of feedback on multiple social media platforms with folks asking me for the recipe. The conversations that followed led me to this latest rewrite of the instructions and the inspiration to post the recipe here as a permanent home for it.

Another reason that I’m posting this is, while I as a person that originates from the American South thinks of this as a common, easy recipe, it seems a lot of folks have trouble with it. That’s also why I included my "Notes Before Beginning" to try to prevent any surprises.

I think a lot of the difficulty some people have stems from what passes for this style of gravy these days in restaurants. I can understand the lack of reference if one did not grow up with multiple relatives making gravy for breakfast, each with their own style (and I didn’t even like this type of gravy when I was a kid, but those memories proved handy when my tastes naturally changed away from wanting something sweet all the time for breakfast).

And speaking of that cheap-ass, thin, hardly-any-meat restaurant gravy…if you’ve noticed the picture and looked at the ingredient list in advance, you have already seen my theory regarding this recipe. When it comes to the amount of sausage, I don’t fuck around.

As for my choice of recommending Louisiana "One Drop" Hot Sauce…of course, like everything, everybody has slightly different tastes. While I also keep other hot sauces in the house, for this recipe, I feel Louisiana’s lower heat but greater flavor works best. Overall, even though the red pepper flake is already bringing heat to the mix, adding a vinegar-based hot sauce of any brand helps cut through the richness of the gravy in a way that the peppers do not. While you can certainly try it, I was not as happy with the results using Mexican-style hot sauces such as Tapatío in this gravy.

The last thing I have to say about this recipe is…I have no idea how many calories it has nor the amount of fat, sodium, or anything else that might be bad for you. It ain’t gluten-free, vegan, low-carb, and it sure as hell isn’t keto. This is old fashioned tastes-damn-good food. Cook and eat this at your own risk…and delight.

Now, for those of you that prefer your recipes straight from the web page, here it is.

With how breakfast sausage is now so lean even if made in the American South, unless you are absolutely confident the sausage you have will leave behind at least two tablespoons of drippings, plan in advance to add more. My preference is to start cooking eight slices of thick-cut pepper bacon in a skillet and then begin cooking the sausage at the same time. Regular bacon is fine if that’s what you prefer or it’s all you can find; I just like the extra pepper plus the thick-cut provides more drippings. The sausage will likely finish cooking first but it’s OK to let it sit once moved into a bowl as it will become plenty hot enough again once placed back into the gravy. When the bacon is done cooking and you’ve removed it from the skillet, pour the drippings into the pot after removing the sausage but before putting in the dry ingredients to begin making the roux (as for the bacon since it will have to sit a spell while the gravy is being prepared, put it on a plate covered with paper towels, put more paper towels on top of the bacon, then zap it in the microwave for 30 to 45 seconds to bring it back to a good temperature before serving) . Another option is to put in a heaping tablespoon of saved bacon drippings. If you don’t have any other pork fat available, add in one or two tablespoons (depending on the amount of sausage drippings) of butter or margarine but turn down the heat to medium-low while making the roux so it doesn’t scorch.

The preferable tool for stirring once you begin making the roux is a big metal whisk. Once the wet ingredients are added to the roux, be sure to scrape the bottom of the pot while stirring to release anything that stuck to the bottom so you bring in all that wonderful flavor.

In a small bowl, whisk together flour, black pepper, salt, and crushed red pepper, then set aside. Place sausage in a wide-based pot. Stir and crumble over medium-high heat, cooking until browned. Remove the sausage with a slotted spoon and place into a bowl, leaving behind the drippings (it is OK to leave behind the tiny pieces of sausage that are difficult to get without also taking out precious drippings). Pour the bowl of mixed flour and spices into the drippings and cook over medium heat to make a roux, stirring constantly, until well mixed and lightly browned (if the roux is already brown in color, just keep stirring until it begins to dry, thicken, or show small bubbles popping over most of it). Gradually stir in milk, then add the Louisiana "One Drop" sauce. Cook and stir constantly over medium-high heat until mixture begins to condense (it will fully thicken after being removed from heat). Stir cooked sausage into gravy. Remove from heat. It is OK to let the gravy sit on the stove if other portions of the meal are still being prepared; just turn the stove on low about five minutes before serving to get the gravy back up to an optimum temperature. Serve on the side or over biscuits, toast, potatoes, chicken, or anything that could use some good old-fashioned country flavor.

Four to six people depending on how hungry and/or Southern they are. Leftover gravy can be stored for later use in the refrigerator for a few days before spoiling or a month or so in the freezer before losing its flavor and proper consistency.

* I prefer breakfast sausage flavored with sage to bring yet another flavor to the party. However, regular or hot sausage will also work well. Go with whatever you like best.

** For a thinner gravy, try reducing the amount of flour to six tablespoons. In addition, the gravy’s final thickness will be determined by when you remove it from the heat. For example, if you remove it right when you first feel resistance as the gravy mixture begins to condense, it will turn out thinner.

*** You can get away with using 2% milk if you must. However, anything less than that will result in gravy that ain’t worth eating.

After trying the recipe as is on the first attempt, never be afraid to adjust the ingredients to your own taste including completely leaving out the crushed red pepper and Louisiana "One Drop" sauce if you or someone you love might be a wuss when it comes to spicy hot food.