For those that believe the United States of America can no longer afford to fund the Corporation for Public Broadcasting (CPB) that, in turn, funds the Public Broadcasting Service (PBS) television network, NPR (National Public Radio), and a myriad of other public, non-commercial broadcasters, take a few moments to view this graphic. 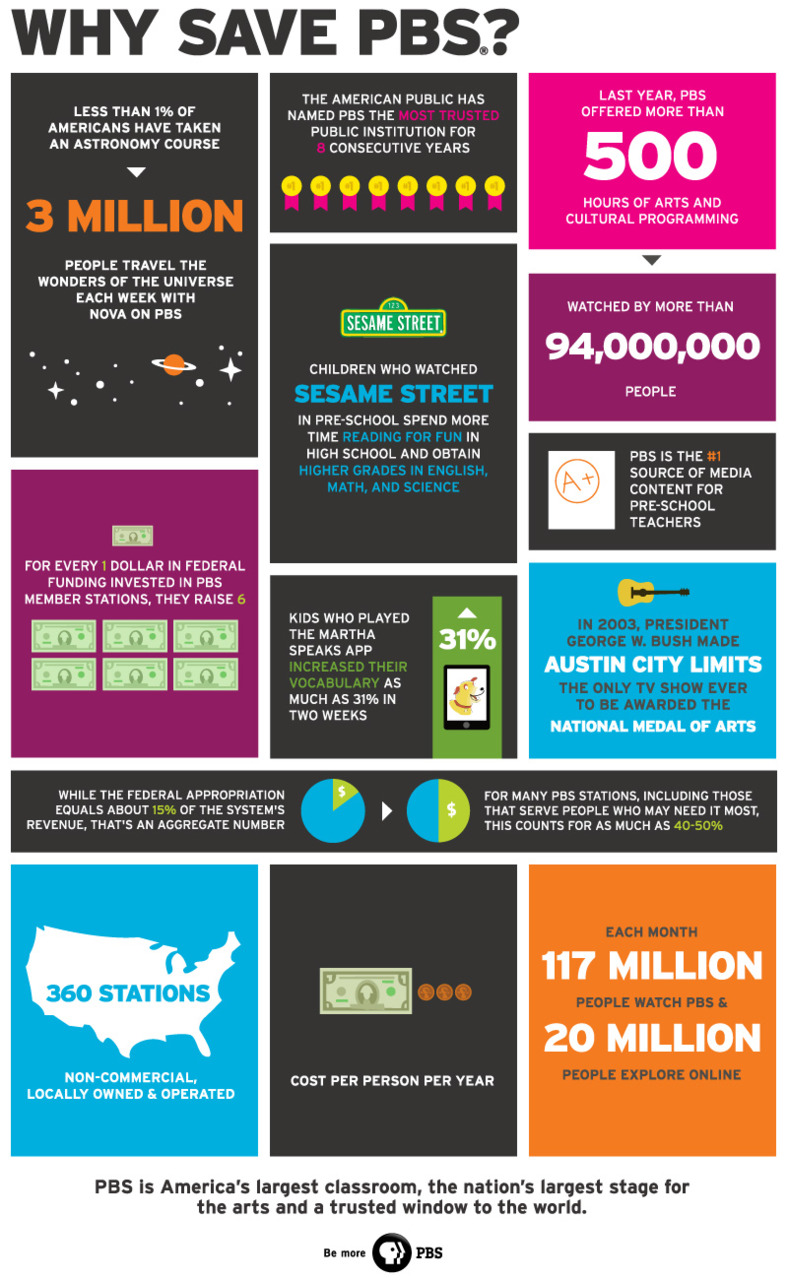 Wow! We could all each save a whole $1.03 every year! That sure would buy a lot, wouldn’t it? Most importantly, it buys the silence of programs like Frontline so citizens will no longer be incorrectly influenced by leftist, socialist, Jesus-hating, homosexual propaganda telling people lies about how Wall Street caused the financial crisis when we all know it was labor unions. It would free the airwaves of this trash that could then be filled by fine, upstanding Christian broadcasters preaching the word of the Lord…well, except those parts about loving thy neighbor and turning the other cheek because then people might not think its a good idea to keep an extra watchful eye on non-Protestant immigrants because we all know that Jesus hates people like that because they take our jobs and waste our tax money, right? Let us especially not forget that it was wrong of PBS to keep William F. Buckley, Jr.’s Firing Line on the air for ages when it was the only mass media outlet for conservative thought through the entire sinful decade of the 1970’s because political ideas should not be subsidized by the government.

All sarcasm aside now, the Republican Party’s reason for wanting to shut down all public broadcasting is so transparent that I’m surprised they even bother with the “We can’t afford it” line.  OK, let me take on the argument of it being part of a whole range of cuts that will get the federal budget back in line.  I’m sorry to say that they won’t.  The budget cuts being proposed by both parties are only for the discretionary spending portion of the budget.  In plain terms, that is the relatively small portion of money left over after we have paid for Medicare, Medicade, Social Security, defense, interest on the federal debt, and the “black budget.”  It is a mere drop in the bucket that won’t make one bit of a difference in how deep this country is in red ink even if we cut off all discretionary spending.

Let me say that again.  We could cut all discretionary spending and it would not reduce the federal deficit.

Maybe some of the people reading this don’t ever watch PBS and, thus, don’t want to pay even $1.03 per year to fund it.  Can anyone be serious that it is not worth that measly amount of money if only to keep Sesame Street on the air?  In a world where most people on the anti-PBS side of the fence also greatly complain about our poor education system, loss of values, and how television is full of trash (especially the portion aimed at children), I cannot see how anyone could think of killing off Sesame Street with its proven educational and moral value to society no matter how many times Rush Limbaugh and the bastion of misinformation, Fox News, told them that something on Frontline was nothing but socialist propaganda.

This just goes to show how out-of-whack this country is right now where anything that truly benefits the lower classes like free, public broadcasting is twisted into being a hand-out and a waste plus how any news reporting that exposes corporate malfeasance, military abuse, or government corruption is perverted into being a socialist plot.  Too many don’t see such things as an investment in either people as individuals or a free informed, and well-rounded overall society.  Worse yet, they don’t see the proverbial man behind the curtain who has big, commercial plans for all of those television and radio frequencies that would open up almost overnight if the CPB is shut down — stations that would not serve the public interest as was so wisely deemed by a smarter Congress many decades ago but would only serve the interest of keeping money, power, and the ability to shape public opinion in the hands of a few.

I hope any anti-PBS people will think about this a little more carefully, especially if they ever had children and might remember watching Sesame Street or Mr. Roger’s Neighborhood with them.  Maybe they will think about it a little more if they see if they can find $1.03 in loose change down between the cushions of their sofas.

Yes, that’s right…just $1.03 per year!  Is anybody other than a politician or delusional “Tea Party” freak really so short-sighted, ignorant, heartless, and narrow-minded to truly believe that this is a budget cut worth making when it wouldn’t make any difference in the federal debt or one’s future tax liability?  Sadly…yes, they are.  Thus, it is time for those of us that appreciate truth, honesty, and diversity — whether moderately conservative, liberal, or somewhere in between — to do two things.  First, write to both of your U.S. Senators and make sure they do not allow the CPB to be de-funded.  Second…start couch-fishing for that $1.03 every year because, whether it is in 2012, 2016, or 2020, barring a huge, unforeseen shift in politics and American opinion, any funding for the CPB will probably disappear one way or another so it will be up to all of us who realize its value to the country to keep PBS, NPR, and all of the rest on the air.

NOTE: Credit for bringing the graphic above to my attention and inspiring this entry goes to the Creative Director of PBS Kids, Mr. Wil Wheaton, thanks to a post he made on WIL WHEATON dot TUMBLR.