Image • 2016.04.302018.01.11 • KoHoSo
NOTE: Since this post was written, KoHoSo Radio 66 did indeed return and is still ready to serve your listening pleasure 24 hours a day. It’s new home page with all the many ways it can be enjoyed are here: KoHoSo Radio 66. This post remains up both because my sentiments remain the same plus I want to keep up imperialgoogie’s incredible fan art.

I am very sorry to announce to the highly appreciated listeners of KoHoSo Radio 66 that the station will not be able to continue past May 1st as previously announced. Whenever Radionomy shuts off the stream, it will be the end of the station.

I had fully planned to go for at least another nine months. I only needed to make a few more adjustments this weekend to be ready.

At this point, I could write a very long description of what happened that forced me to change my mind. I could then make it even longer by putting it into the context of the history of how recorded music has been dealt with in the United States from the dawn of radio through the birth and expansion of the Information Age.

To be brief and blunt, it all comes down to the fact that I believed a lie. Radionomy promised in all the legal mumbo jumbo I had to go through to sign up for its service that they would pay the song royalties that were rightfully due to the song owners. Apparently, they have not made any such payments since late 2014.

With that, they opened up themselves as well as station owners like me to the legal departments of the other no-good-niks in this story, the big music conglomerates of Sony and Warner Music Group with their high-paid legal teams. Instead of just going after Radionomy and its bigger corporate parent, Vivendi, they have us little guys and gals in their sights, too.

Maybe if this had happened to me 20 or 30 years ago when I had nothing to take, I would have been all up for that thing I always love, sticking it to The Man. After all, there’s no better representation of The Man than the big record companies who always squeal like pigs that they’re supposedly losing money to "pirates" yet do everything they can to cheat their artists out of every possible penny.

Alas, that is not my position in life now. I’m 50 years old with a mortgage to pay and Miss KoKo to protect. This is one where I have to let The Man win the battle so I can retain my fortified position in order to continue the overall war against him.

I am again at a point where I could write a lot more to explain the details of how this all happened, the decades of history behind it, and how I feel about this for both my audience and myself. Yet, as I’ve been trying to find the correct words and, most importantly, the right amount of them, some of the opening lines of an early 1970s song that looked back to the core era of the time KoHoSo Radio 66 covered keep coming to mind

Well, we got our chance, we danced, and we were happy with it for nine whole months. While we do end up with this being yet another day the music died, never forget that the songs this station played continue to live on no matter how much they are misused, mistreated, and mishandled. Thanks to the occasional movie and more than a few modern video games introducing this music to the younger generations, even though KoHoSo Radio 66 won’t be around any longer to do its part in playing them, to paraphrase another old song, the love for these songs will not fade away. 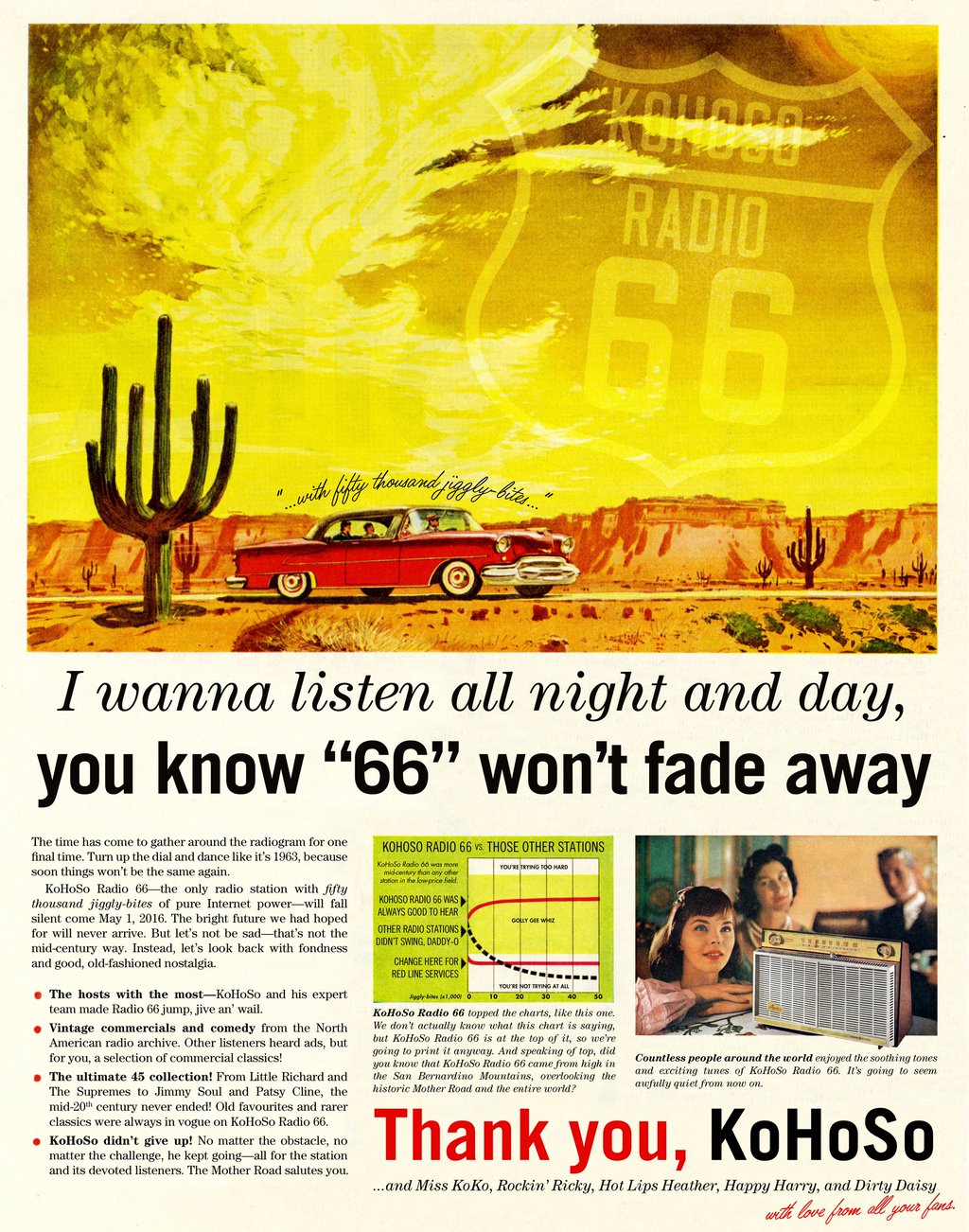