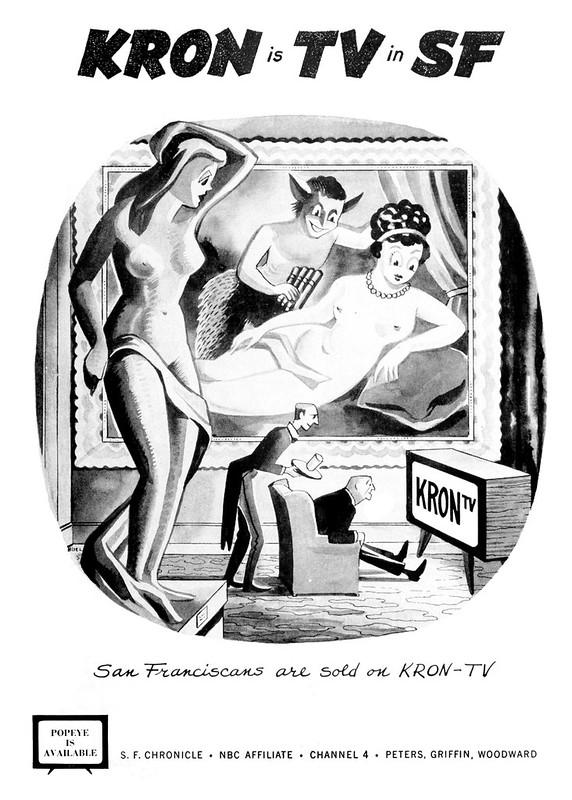 This station certainly would have been something for advertisers to be sold on in 1956. Given the call letters KRON in honor of the owners’ most famous property, the San Francisco Chronicle newspaper, NBC’s stellar lineup of programs at the time combined with the station’s ability to call on the paper to supplement its own news department made it a favorite among Bay Area viewers.

KRON’s heavy focus on local programming continued all the way through the 1990s, well after most stations only produced local news. This kept it first in the heart of most San Franciscans (and in all of the surrounding cities and towns) but occasionally brought the ire of NBC as the station would occasionally shift network programs to other time slots or even not show them at all. Despite any indigestion over this, NBC let it pass as KRON continued to bring home the bacon even during years when NBC’s prime time programming was far less then stellar.

When the deYoung family decided to divest themselves of all the Chronicle’s properties including KRON, it triggered a downward spiral from which the station has never recovered. In a long complicated story that can be read in full at the Wikipedia article on KRON, the station went through a disastrous new ownership and ended up losing its affiliation with NBC. First becoming an independent station and ultimately ending up being affiliated with MyNetworkTV, KRON almost immediately went from being one of the highest-rated stations in the entire country to a mere afterthought. Just within the past two weeks, KRON received another blow as some horse-trading between station owners has assured that KRON will lose MyNetworkTV to KICU and again become a full independent.

I don’t think there is another television station anywhere in America that has been a decades-long market leader and then fallen so far and so fast that it often pulls a lower rating than stations showing infomercials. For the foreseeable future, not even Popeye could save this station from the bottom of the ratings even if he ate ten gallons of spinach.