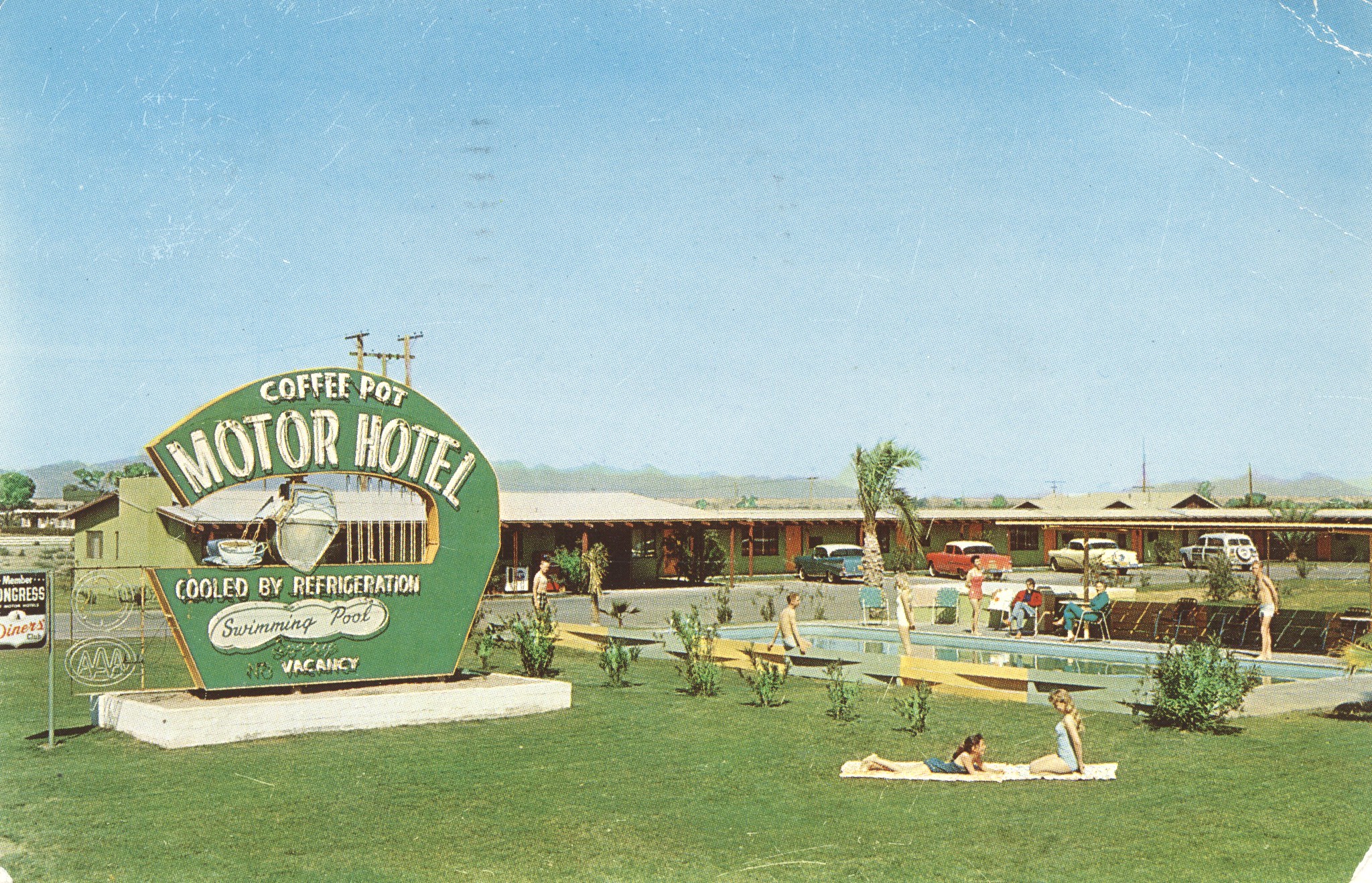 While this might not be the most pristine postcard I have ever posted, I went absolutely nuts as soon as I laid eyes upon it. Knowing Blythe fairly well certainly caught my eye but that glorious sign continues to hold my attention.

Blythe is a small city on the Colorado River just across from Arizona. In its better days, it was a major stop for travelers and truckers as Hobsonway (yes, spelled as one word) carried U.S. Route 60 and U.S. Route 70 to Los Angeles. Being about halfway between Phoenix to the east and Palm Springs to the west, it was perfectly located for either a bite to eat or a good night’s sleep. Of course, that changed more than a bit once Interstate 10 bypassed Hobsonway.

There are still many ghosts and scars in Blythe that give a hint of the neon oasis it once was. Pretty much only the Courtesy Coffee Shop still remains open with owners still taking good care of its googie exterior. As for the Coffee Pot, it was not so lucky.

I can’t find a record of exactly when it happened, what reason was given, or why nobody thought it was worth saving. However, at some point, this absolutely magnificent neon sign was taken down and thrown away. The motel is still there but, as with the sign, anything nice has been stripped away and, of course, the swimming pool filled in.

The property is now called The Oasis which is about as fitting as calling McDonald’s a French bistro. It’s not fit for travelers so it has become a haven for folks messed up on hard drugs and the scum that prey upon them and others. One would have no idea of this site’s former glory had I not been able to ask a friend living there about it and then scoured Google Maps until I found a matching building complete with a different-colored patch of dirt that exactly matches where the pool is in this postcard.

Despite it being a common story that the majority of these neon beauties were torn up and thrown away, this one stings pretty bad even though I only recently became aware of it. I mean, just look at it! It has everything that was in every such neon sign ever. The overall shape is unique. The coffee being poured from the pot into the cup was animated. The vertical neon tubes filling in the rest of the inner portion of the sign were certainly animated. The "Swimming Pool" is in a script font and enclosed in a cloud-like amoeba shape. The chain link fence holding the stand-alone Automobile Club of Southern California and AAA neon signs is extremely unique. Then, its all topped off by the extra motel association and Diners Club signs.

I’ve said this before but I’m going to say it again. It’s rare items like this postcard that make me grateful every day that Jordan Smith is on this planet being one of the very few people with the patience and drive to find, buy, save, and scan these lesser-known gems of the mid 20th century…and not just to scan the front but to also document the back complete with whatever was written on them plus the advertising copy. It really helps these old places come alive and give one a sense of what it might have been like to be there. It must have been a friendly place that took its name seriously as there’s nothing better to make travelers happier than…