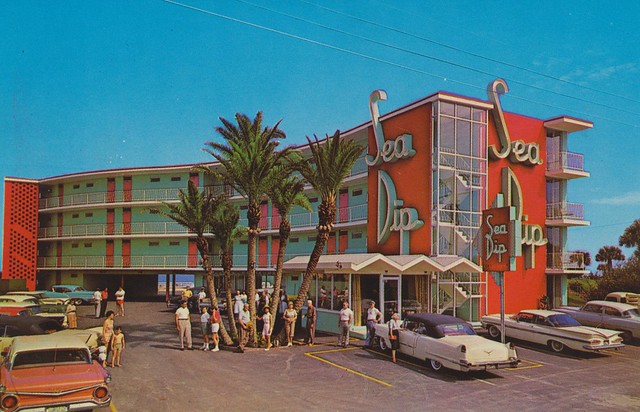 Sea Dip Motel and Apartments – Daytona Beach, Florida U.S.A. – 1950s
Scan Copyright © The Cardboard America Archives (Jordan Smith) on Flickr.
All rights reserved.
When I first started playing around with my now-defucnt Tumblr blog, this was the first item that planted the seed in my head about posting retro/vintage/Americana material on a regular basis. While I first found this postcard from Adventures of the Blackgang, it was the source of the post that made me realize there was not only an audience for such material but an almost endless supply of it that needed to be shared.

That source is Jordan Smith who has several blogs on many platforms plus his massive Flickr account but is probably best known as “The Pie Shops” guy. Mainly thanks to Twitter, I have gotten to know Jordan a little bit which has been a great pleasure. That truly started when he was sort of live-tweeting his experience at a Mickey Hart Band concert where Jordan was having his first full encounter with Dead Heads (a group with which I am intimately familiar), and went on when I was able to help guide him on a purchase of a new computer when the one he had was dying and preventing him from posting. It continued as we occasionally went on quixotic quests to encourage people not to steal the work of anybody that takes the time to scan vintage material.

While this was only the first of many items Jordan has scanned that I posted during my days on Tumblr (with many more to come here on KoHoSo.us), it is still one of my absolute favorites and I believe it is one of his, too. I cannot even begin to count how many times I saw this postcard on Tumblr and elsewhere so it might be a rerun for many reading this today. Still, like a great old song, it deserves a replay and to be passed on to those that have still not experienced it.

Despite what some comments around the World Wide Web say, the Sea Dip is still there and open for business. However, it has sadly lost all of the color and signs that has made Jordan’s scan so popular. The link below should show what the place looks like today on Google Maps Street View. For those that get a little bit emotional about how fun architecture, color schemes, and signs disappear, I suggest having a tissue handy.